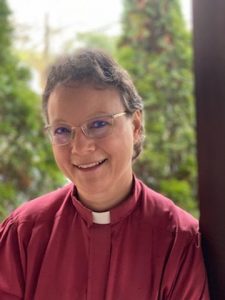 Assistant Professor of Preaching and Worship

The Rev. Dr. Leah D. Schade is the Associate Professor of Preaching and Worship at Lexington Theological Seminary in Lexington, Kentucky. An ordained Lutheran minister (ELCA) for more than twenty years, Leah earned both her MDiv and PhD degrees from the Lutheran Theological Seminary at Philadelphia (now United Lutheran Seminary). She has pastored three Pennsylvania congregations in suburban, urban, and rural contexts. Her book, Preaching in the Purple Zone: Ministry in the Red-Blue Divide (Rowman & Littlefield, 2019), explores how clergy and congregations can address controversial social issues using nonpartisan, biblically-centered approaches and deliberative dialogue. She is also the author of Creation-Crisis Preaching: Ecology, Theology, and the Pulpit (Chalice Press, 2015), as well as For the Beauty of the Earth , a Creation-centered Lenten devotional (Chalice Press, 2019). She is co-editor and author with Margaret Bullitt-Jonas of Rooted and Rising: Voices of Courage in a Time of Climate Crisis (Rowman & Littlefield, 2019), and co-author with Jerry Sumney of Apocalypse When?: A Guide to Interpreting and Preaching Apocalyptic Texts. She is also the EcoPreacher blogger for Patheos.

In December 2021, Dr. Schade was elected 2nd Vice President of the Academy of Homiletics, a three-year position that will culminate with serving as President of the Academy in 2024. She has been a featured speaker for the Festival of Homiletics, leads workshops and retreats, and keynotes events throughout the country. She is the director of a Wabash grant exploring the use of deliberative dialogue in congregations and theological education and is part of a research exchange with the Kettering Foundation studying the role of religious organizations in democratic community building. Dr. Schade is also conducting a longitudinal research study about ministry, preaching, and social issues that has surveyed nearly 3,000 clergy and 1,000 laity since 2017.

Dr. Schade received the Kentucky Council of Churches award in 2019. She is also co-founder of the Clergy Emergency League, a network of more than 2,600 pastors throughout the U.S. who provide support, accountability, resources, and networking for clergy to prophetically minister in their congregations and the public square in this time of political upheaval, social unrest, and partisan division.