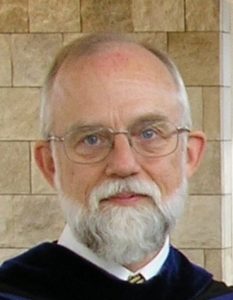 Born in Lafayette, IN, Dr. Weis grew up in Cincinnati. He earned an A.B. in Classical Studies from the University of Michigan and an M.Div. from Princeton Theological Seminary. He was ordained by the United Presbyterian Church in the U.S.A. as a Minister of Word and Sacrament and served Presbyterian churches in Paterson, NJ, and Beaumont, CA. He received his Ph.D. in Religion from Claremont Graduate School. As a graduate student, he served as Director of the Ancient Biblical Manuscript Center for Preservation and Research in Claremont, CA.

He began his academic career as Assistant and then Associate Professor of Old Testament at New Brunswick Theological Seminary (NJ) and eventually became Dean there. Next he served United Theological Seminary of the Twin Cities (MN) as Dean and Professor of Old Testament Theology. He received the D.D. honoris causa from United when he left to become Vice President for Academic Affairs and Dean and Professor of Hebrew Bible at LTS in 2011.

Dr. Weis participated actively in the work of the local Presbytery, serving as a guest preacher and teacher at many churches. He specialized in textual criticism of the Hebrew Bible and was a recognized Jeremiah scholar who wrote for and edited numerous scholarly books and journals. He was a member of various work groups, notably in feminist hermeneutics, of the Society for Biblical Literature. He served 30 years on the international committee producing Biblica Hebraica, Editio quinta funditus renovata, a new edition of the entire Hebrew Bible (Old Testament) that takes account of evidence from the Dead Sea Scrolls and other manuscripts unavailable during production of previous editions.

Dr. Weis was preceded in death by his parents, Vernon and Verna (Kugler) Weis; his brother, Robert Weis; his parents-in-law, Asa L. and Dorothy (Woodbury) Rogers; his sisters-in-law Joanne (Rogers) Samuda and Patricia (Rogers) Maimone; and many beloved cats. He is survived by his loving wife of 43 years, Barbara Rogers, and their cat Pearl; his brother and sister-in-law; a sister-in-law; several nephews; and countless students and colleagues whose lives and careers he nurtured.

“Dean Emeritus Weis was an extraordinary dean whose administrative career spanned 25 years, six of those at LTS,” said current LTS Dean and Vice President for Academic Affairs Rev. Dr. Loida I. Martell. “At LTS, he was a key figure during the transition to an online format. He restarted the D.Min program and was instrumental in the creation of the Certificate in Hispanic Ministries Program. I will always be grateful for his leadership and for his friendship, and will profoundly miss the wisdom of his insights.”

“Rich was a Dean’s Dean,” said LTS President Dr. Charisse Gillett. “He was a gifted educational administrator and theological educator. He loved his work and cared deeply about the education of students for ministry and for the church. LTS was well-served by his leadership and passion for the church during its period of transformation.”

A private service will be held at Hunter Presbyterian Church in Lexington, KY, at 11 a.m. EST Tuesday, Jan. 12. The service will be accessible by Zoom. Please contact the church at office.hunter109@gmail.com for the link.

In lieu of flowers (Rich was an avid gardener, but he went apoplectic at the thought of cutting the flowers), contributions are suggested to God’s Pantry Food Bank in Lexington, Lexington Theological Seminary’s Certificate in Hispanic Ministries Program or the Nature Conservancy.

“On behalf of the Board of Trustees and the entire Lexington Theological Seminary community, we extend our condolences to Dean Weis’ wife, Barbara, and the entire Weis family and give thanks for Rich’s life of scholarship and service,” said Rev. Doug Lofton, LTS Board Chair.